Very frequently small beginnings have tremendous results. It seems of very little importance that two gentlemen should leave the Penistone Railway station, but the two who left one day in the year 1861 had a very important mission to perform, namely that of looking out a piece of land for the erection of works which were to be the making of the then quiet market town on the banks of the Don. The town was already of some importance from a railway point of view for it formed a junction between the L & Y Railway and the M.S.& L. Railway (now the G.G.R.). The two gentlemen in question wended their way towards two or three green fields encIosed by the railway, the road, and the Green Dyke. Later in the day these same two gentlemen met a Local land surveyor and the owner of the land at the Old Crown Inn, and there the deed was done, Mr. Thomas Marsden selling the land under notice, and as in all small places, it was soon noised abroad that Penistone was to undergo a great change by the erection of works of an extensive character, and to a certain extent the rural beauty of the little town was doomed, but it was not likely that a pIace with such facilitics should hang back in the hurry and bustle of commercial life. It is an ill that blows no one any good, and this ill wind, if such it may be termed, caused the Influx of men of thought, and great mind, who were to carry on the social domestic machinery of the town, as well as the religious life, It caused the old church to arouse out of its slumbers; it caused the erection of new ChapeIs; in fact it played a very prominent part in all phases of life. The company was called The Yorkshire Steel & Iron Co.

The works were soId to  Messrs. C Cammell and Co. Ltd. In 1864, since which time they have been greatly extended.

Approaching the works at Penistone, from Springvale, the observer comes first in contact with the offices of the company, the block comprising manager’s, cashier’s, and time offices, with Board and luncheon rooms above. Beyond this stage the stranger is not allowed to pass, unless on business.  Through an archway one passes on to the works proper; leaving the other offices, and the stables of the company on the right. Taking  a turn, we approach the metal bank and the company’s railway sidings. Here we meet with an organised hive of obstacles to progress: waggons, and an almost countless stacks of pig-iron, all of which are destined to play a prominent part in the history of the work of the day. Veering round, we see before us the mighty vessels of the “Bessemer” spherical vaults of fire, the blowing of which furnish a panoramic illumination of a most Interesting character. The latest vessel was Installed some years ago, and rejoices in the name “Jumbo”. The passing of a solid mass of red hot material, weighing 18 cwt. over the weighing machine is a familiar sight, and one that is not easily forgotten.

Looking from the “Bessemer” one sees a curling rod of red hot metal creeping snake like along the road, This is the rail mill. Messers CammelI and Co, take a certain amount of pride in this department, and the work produced has for years had the merited approbation of railway companies in all parts of the globe. The old employees remember that for a previous Paris Exhibition a rail was rolled which defied the competition of the entire continent of Europe, and excited the admiration of all the visitors to that now famous gathering. The rail was rolled from an Ingot weighing one ton eight hundredweights, and exceeded considerably over a hundred feet in length. For the purpose of exhibition it was bent In a most interesting fashion. Some year’ ago on the day of the Varsity Boat Race a train ran off the metals at Penistone, and twisted the rails to an alarming extent.They stood the test however and a distorted specimen obtained by Messrs. Cammell & Co., a testimonial for all time to durability, under the most extreme circumstances. In the distance one hears the mighty thud of falling hammers, and a short journey brings the enquirer to the scene of action. The works have in motion no less than eight hammers. The one of greatest interest is that at which cranks, another speciality of the company, are made. This particular hammer has been known to transform a piece of metal weighing some twenty tons into a most useful engineering commodity. The other hammers are employed in the making of axles and tyres.(Railway wheels)

The works in Penistone provide empIoyment for nearIy a thousand men and boys. 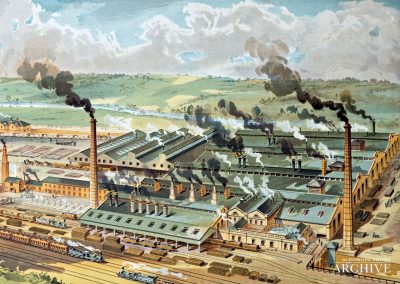 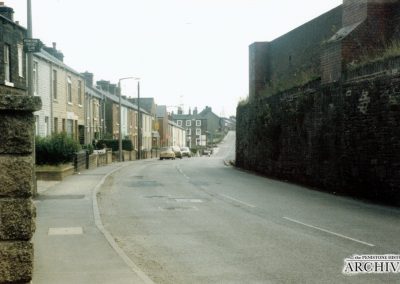 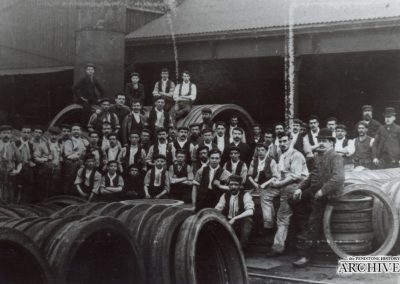 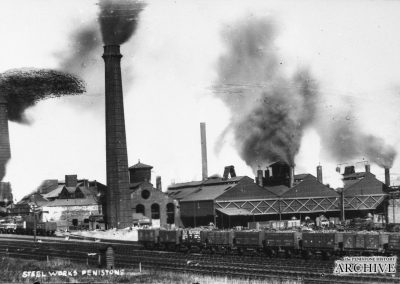 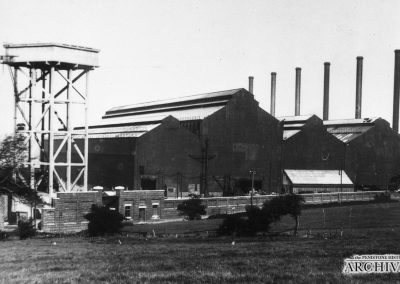 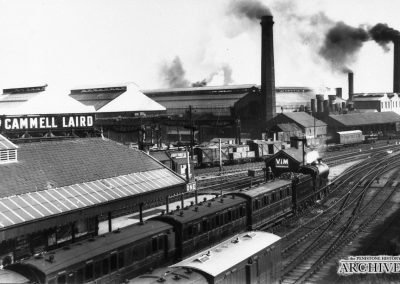