The cinema opened on Friday 19th November 1915 with a charity performance, the next evening normal programs began.          The appearance of the hall was enhanced by stained glass panels in the domed ceiling lit by skylights in the roof. The West Riding licensing authority were adamant that the construction of the balcony did not comply with the bye-laws applicable to entertainment halls so only the ground floor was used. On this the basis seating was around 550 Plush seating was quite attractive and positioned on red felt, but needed to be stacked away when the hall was used for dances, for which purpose the sprung floor was suited. Films were shown from 7 till 10pm but on a Saturday evening there were two houses and a matinee at 2-30pm. Seats were 3d, 4d, 6d, and 9d, or 1/- if booked in advance. The more expensive seats were on offer at half price after 9pm young people under 17 were admitted for 1d up to 7-30pm

Most of the local community activities had been disrupted because of the onset of war. During these years there were no theatrical bookings, but dances were popular and usually held on a Friday evening.

1930 A report in the trade journal suggest that “talkies” were first shown in October 1930 with a sound system and projector installed. Films were often for three days with a change of programme on Thursdays. Children’s matinees are mentioned in 1931/32 but not in 1933 or later in the thirties.

1935 The hall was renovated and more comfortable seating provided

1940 In July of this year there was reference to half-price admission for those in the forces, but the concession was not available on Saturday

1947 In March of this year the Operatic Society was back, returning with a new production each year.

1948 The possibility of Sunday opening was raised but at a public meeting the majority voted against this.

1950’s During the late 50’s film audiences were getting smaller and in 1959 the Council agreed a tempore rent reduction.

1960’s From 4th June 1961 a new lessee took over so the future seemed brighter for the Cinema with “Saturday Night and Sunday Morning” booked for the opening week, new toilets and another exit had been provided, whilst the sales kiosk had  been moved to position along-side the pay box. The interior was redecorated the work being carried out in the daytime and on August 28th there was a civic Ceremony with the showing of Tony Hancock’s “The Rebel”.

1962 There were sometimes as many as four film programmes a week playing Sunday only and two days each for the rest of the week. The venue had ended with the Council taking over and eventually Penistone Urban District Council decided to run the show itself.

1963 During this year films were now show on three evenings a week from June there was a children’s matinee at 2.30pm Bingo had been discontinued but there were monthly wrestling bouts that continued into the New Year.

1966 October there had been further calls to improve the stage facilities due to the impending closure of the drill hall which had previously been available to other companies in Penistone.

1967 The Penistone Players and children’s Theatre Group moved to the Town Hall but chose to fit its own larger stage over the normal stage.

1969 Work on the Town Hall was progressing, there was new dressing rooms and improved stage facilities, which would be in place by the end of March when the Penistone Operatic Society would be putting on its production of Wild Violets.

1971 There was talk of possible cinema closure.

1974 In April there was a reorganisation of local government and the Town Hall Cinema was transferred to the newly formed Barnsley Metropolitan District Council. A bar had also been installed but it was only used when dances were held.

1979 Steve Tales was given the title of cinema manager and became responsible for all the activities on the site.

1980 When live shows were being shown it was asked that the bar was made available for them.

1989/90 At this time the manager became licence and for the first time the bar  was on offer to cinema audiences, although only when an “18” film was showing quite soon however the bar was open for all evening performances.

1999 A Penistone Film Society was formed, which hired the cinema on a monthly basis.

2000 A Compton organ was installed which had started life in the Paramount now Odeon New Street Birmingham.

In recent years there have been further improvements to the stage facilities, with new floor covering curtains and tracks.

2005 April the seats and carpets were replaced seating being raised to 351.

There are a few cinemas still in business that opened in 1915 or earlier but not many. However the Penistone Cinema may be unique that it has operated throughout as an entertainment hall provided by the local movement services.

A  Carnegie Library is a library built with money donated by Scottish businessman and philanthropist Andrew Carnegie. A total of 2,509 Carnegie libraries were built between 1883 and 1929 including some belonging to public and university library systems. 1,789 in Canada and others in Australia, South Africa, New Zealand, Serbia, Belgium France, and several other countries.

At first, Carnegie libraries were almost exclusively in places where he had a personal connection  namely his birthplace in Scotland and the Pittsburgh, Pennsylvania area his adopted home town. Yet beginning in the middle of 1899, Carnegie substantially increased funding to libraries outside these areas.

In later years few towns that requested a grant and agreed to his terms were refused. By the time the last grant was made in 1919 there were 3,500 libraries in the United States nearly half of the built with construction grants paid by Carnegie.

The first of Carnegie’s public libraries, Dunfermline Carnegie Library was in his birthplace Scotland, It was first commissioned or granted by Carnegie in 1880 to James Campbell Walker and would open in 1883. The locally quarried sandstone building displayed a stylized sun with the carved motto “Let there be light” at the front entrance.

The library can be traced back to a Reading Room in the 1880’s it is understood that this was run in the Post Office by a Mr. James Wood who then handed it over to the Library Committee. The Carnegie Library was first mooted at a meeting in Penistone as far back as 1902 but the difficulty was finding a suitable site, Andrew Carnegie first offered the Council the sum of £1,000 on condition that the inhabitants could raise an endowment fund of £500 and in 1903 the offer of Carnegie’s fund was increased to £1,300 for provision of a free library,

The Library was opened in June 1913 on Shrewsbury Road by the Earl of Wharncliffe.

The first selection of books for the library was in the hands of a sub-committee which included Mr. Walter Gledhill the then headmaster of Spring Vale Council School, a Miss Wood and Miss Ogden became the first librarians of the library.

The April 7th, 1911edition of The Building News contained an article about the selected design for the library. This, along with the original plans can be seen below.

Penistone had taken another step forward in providing a New Town Hall and Council Officers this new building was a continuation of the Free Library and erected in October 31st 1914 in Shrewsbury Road, at a cost of £4,200

The site was procured from the Sheffield Shrewsbury Hospital Trustees in consideration of the Council taking over and adopting the Shrewsbury Road as a public Road.

The Town Hall and Urban Council Offices were opened by Alderman E Woodhead J.P. There was a large gathering in the Hall at the Opening Ceremony with the district for some miles around being represented.

The first inquest in the Penistone Town Hall in December 1914 was of a Mrs. C Mitchell, age 82 widow of Benjamin Mitchell who died as a result of a fall. 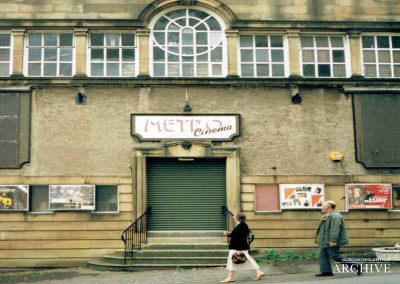 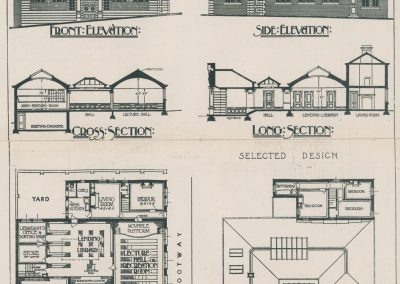 Plans of the Library

Included in the Building News article. 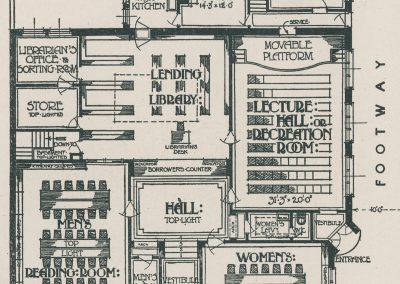 From the same source. 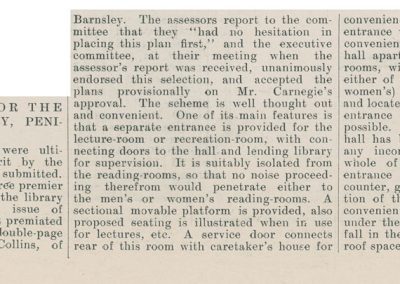