Woodhead is a small and scattered settlement at the head of the Longdendale valley in Derbyshire, England.  It lies on the trans-Pennine A628 road connecting Greater Manchester and South Yorkshire, 6 miles (10 km) north of Glossop, 19 miles (31 km) east of Manchester and 18 miles (29 km) west of Barnsley.  It is close to the River Etherow and the Trans Pennine Trail.  Like nearby Tintwistle and Crowden, the hamlet lies with the historic county boundaries of Cheshire.

Woodhead is the location of the western portals of the Woodhead Tunnels, three former railway tunnels on the electrified Woodhead line between Manchester and Sheffield.  There was formerly a railway station and signal box at Woodhead.  The Woodhead railway line closed in 1981; the trackbed between Woodhead and Hadfield now forms the Longdendale Trail.  The platforms are still intact, although the track has been removed.

Among the remains in the graveyard of St. James Church, a small 18th Century chapel, are the unmarked graves of navvies who died during the construction of the tunnels.  Adjoining the church is Bleak House, a Grade II listed 19th Century dwelling.  Two miles to the east, the Lady Cross marks the highest point of the former packhorse road from Longdendale to Rotherham.  Only its base and the bottom of the shaft survive.

The hamlet gives its name to Woodhead Reservoir, the highest in the Longdendale Chain of reservoir

Woodhead Tunnel, on the London and North Eastern Railway, 9 miles from Penistone, is widely known.  Mr. J.N. Dransfield was informed by Johnathon Roebuck who witnessed the event, that when the tunnel was bored through it, the event was celebrated by the roasting of a bullock whole at Saltersbrook.

The Tunnel, which penetrates the backbone of England, was commenced in 1838,Lord Wharncliffe turning the first sod on October 1st.  According to the late Mr. J. Wood, Mr. Vignoles, the first engineer, estimated the cost at £98,467; Mr. Locke his successor, at once doubled the amount.

The Tunnel is three miles 43 yards in length, the maximum depth below the surface is 600 feet and it is 943 feet above sea level. During its construction, 1,500 men were employed together, 26 lives were lost, 200 serious accidents and 450 accidents of a minor character occurred. 157 tons of gunpowder were used, and 8 million gallons of water were pumped out. The total cost of making it was £331.584, the first train consisting of 20 carriages, and drawn by two new engines left Sheffield at 10.5 a.m. on December 22nd 1845, and it was 10 ¼ minutes in passing through the tunnel, arriving at Manchester at 12.15 p.m.

The tunnels are separated by a wall of rock,14 feet thick, pierced at intervals, and each contain a single line; when the second tunnel was in the making in 1849, cholera suddenly made its appearance among the workmen living in the huts at the Woodhead end.  28 deaths took place in a short time the disease generally carrying off the victims in a few hours. The arrival of a number of coffins, created a panic among the workmen, and most of them left the place. A navvy’s widow, known as Peg Leg, was a real heroine during this time and she volunteered her service as a nurse.  One morning she was seen leaving the road side Inn, and it was soon reported that she had taken the cholera.  The report proved true, and the unfortunate woman died the same day. 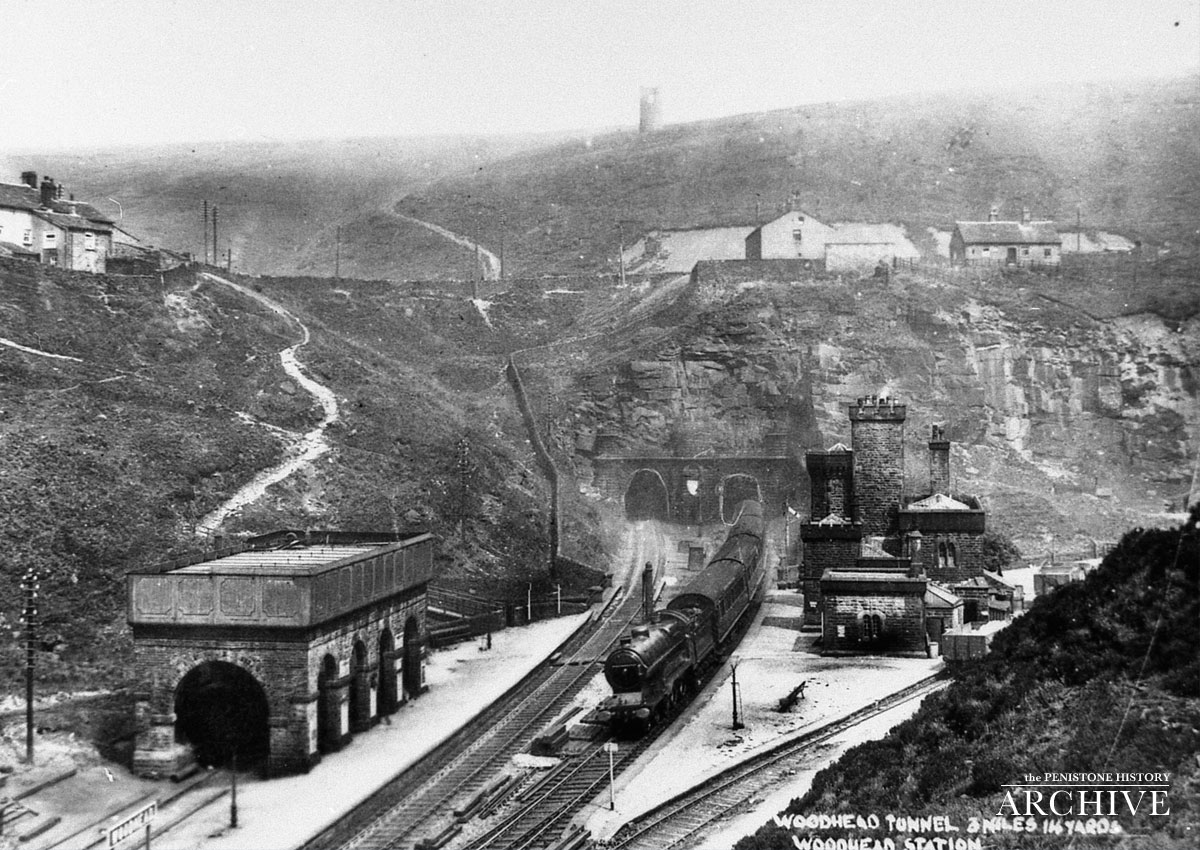