Penistone is a market town and civil parish within the Metropolitan Borough of Barnsley. Historically in the West Riding of Yorkshire, it is 8 miles (13 km) west of Barnsley, 17 miles (27 km) north-east of Glossop, 14.2 miles (23 km) north-west of Sheffield and 29 miles (47 km) east of Manchester in the foothills of the Pennines.  The surrounding countryside is predominantly rural with farming on rich well-watered soil on mainly gentle slopes rising to the bleak moorland to the west of the town. Dry stone walls, small hamlets and farms surrounded by fields and livestock are synonymous with the area.

The place-name ‘Penistone’ is first attested in the Domesday Book of 1086, where it appears as Pengestone and Pangeston. Penistone is situated on a high ridge, which is believed to be the source of its name. (‘Pen’ is celtic for a hill. ‘Stune’ meaning is a settlement. The ‘s’ represents ‘by’. Hence settlement by (or on) the hill.)

Penistone town centre is a designated conservation area. The town is a significant principal town serving the rural hinterland to the west of the borough. From 1699, Penistone held its three day summer fair (10-12 June) and a market every Thursday in front of the church of St. John the Baptist. The effect of the market was significant; stimulating trade and commerce and resulting in expansion and an increase in local importance. Penistone underwent significant expansion during the nineteenth century, specifically along The Green, High Street and Market Street. Properties within the Penistone Conservation Area tend to be residential, but a large number of the village’s amenities are located within the historic core such as: the market, health centre, library and shopping district. Properties tend to comprise of two storeys. Architecturally the designs tend to be of the local vernacular, with rows of terraces and properties with relatively formal architecture surrounding the Church of St John. Building material is predominately sandstone and the roofing material tends to be stone slate. There are a number of listed buildings within Penistone, many of them are clustered around the church including the 1 to 3 Market Street (NHLE 1314710, Grade II)
built in 1768 by John Platt of Rotherham, which was a former Cloth Hall and is now shops. It is an attractive addition to the streetscene. Adjacent to it is 5 to 7 Market Street (NHLE 1286806, Grade II). Opposite it is 8 Market Place (NHLE 1151831, Grade II), a historic building with shops. The former Midland Bank is also listed (NHLE 1286793) and dates from the late 19th century. It’s coursed squared rubble with ashlar dressings and Westmorland slate roof complete with an ordered but asymmetrical curving facade of 10 bays on a corner site make it an attractive and notable building opposite the church. It is built on the approximate location of the original Penistone Grammar School, which has its origins in the late 14th century and is now located just under 1km northwest of the original site.

An annual Penistone Agricultural Show is held on a Saturday in September where you may still see the now rare Penistone sheep, called the Whitefaced Woodland. Sheep sales were held in the town since before 1699, when the market received a royal charter.

The ancient church of St John the Baptist, is the oldest church still standing in Penistone. In addition, there is also the former Netherfield Chapel and St. Paul’s which amalgamated to form St Andrew’s in the High Street plus St Mary’s RC Church on Talbot Road.

Penistone Grammar School was founded in 1392, when it is recorded that a gift of land was made by John Clarel, Lord of the Manor at Penistone, for the purpose of a school. The was rebuilt in 1702 and in 1892 the school withdrew from its town centre position and is now about half a mile north-west of the town centre.  Around this time the school took fee-paying boarders, and had a strong reputation for mathematics and science, and a tradition of sending students to the University of Cambridge. The school remains on this site, however in the late 20th century the school ceased to be a grammar school, becoming one of the first neighbourhood comprehensive schools in the country. Although it retained its Grammar school name and traditions such as house system and speech night.

The original Church Street School was opened in 1868, some four years after land had been given for the purpose by the Wentworth family.

Extensions were made in 1870, 1900, 1911 and 1924, and a modernisation scheme in 1955. The school was made very attractive inside, without coming up to the standard of modern buildings. Some of the classrooms were rather small and there were no indoor lavatories!

In 1959 the School became a Junior and Infant School, the numbers being about 350. St. John’s School began using the Old Girls’ National School in 1944, and two West riding classrooms in 1952. These later were removed and the National School reverted to its own trustees.

Early in the 1950’s the West Riding worked out their development plans for schools in this area, and St. John’s was found to be inadequate in size for teaching, for playground and sport facilities, and the buildings fell below the new standards.  It was decided to build a new school and the managers decided to retain “aided” status and be responsible for the new School. The present KS2 building, was officially opened on the 18th September 1968, by the Bishop of Pontefract, the Right Reverend W. G. Fallows, J.P., D.L.

Although the intention had always been to have one primary school, it soon became apparent that due to an expanding Penistone population and limited space in the new school that a separate infant and junior school site would have to be created.

This led to the creation of two new schools, and in January 1976 a Church of England (Controlled) Infant School was opened in new premises on the west side of what was now the Junior School playing field.

After many years, from the 01st January 2012, the two schools were finally administratively remerged to become a through Primary school from nursery to Year 6.

On leaving this school the children normally transfer to Penistone Grammar ALC  originally founded in 1392. 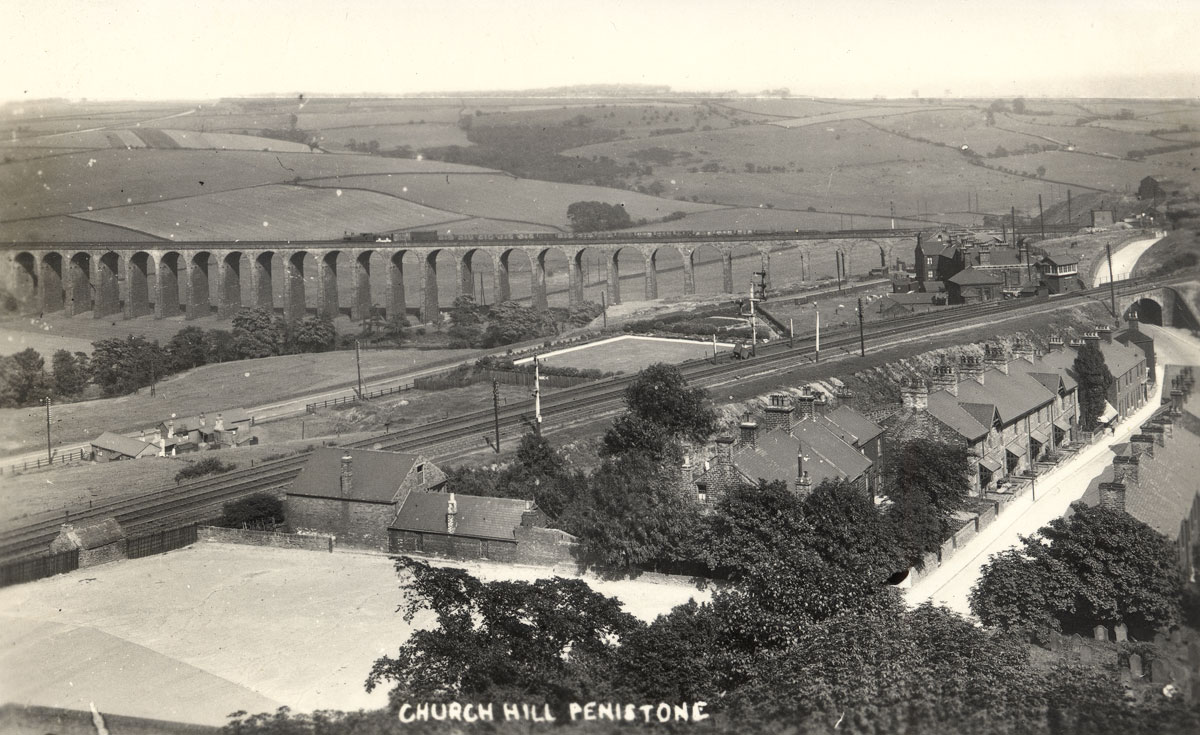 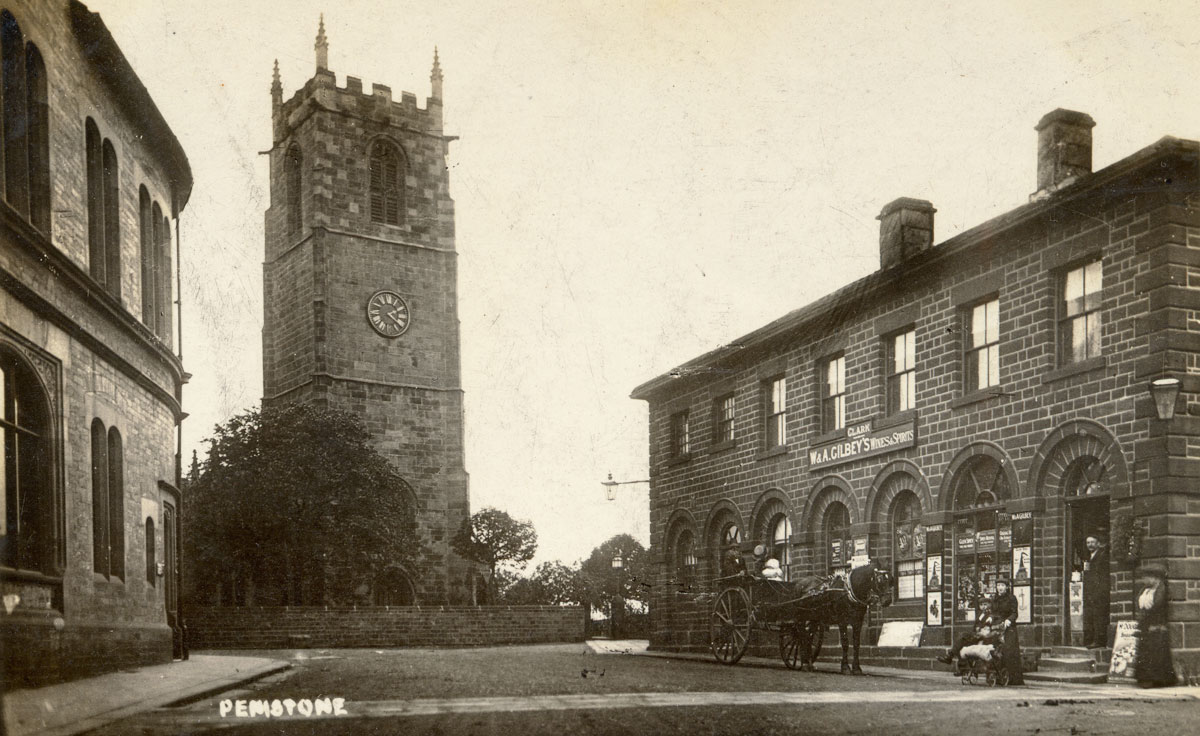 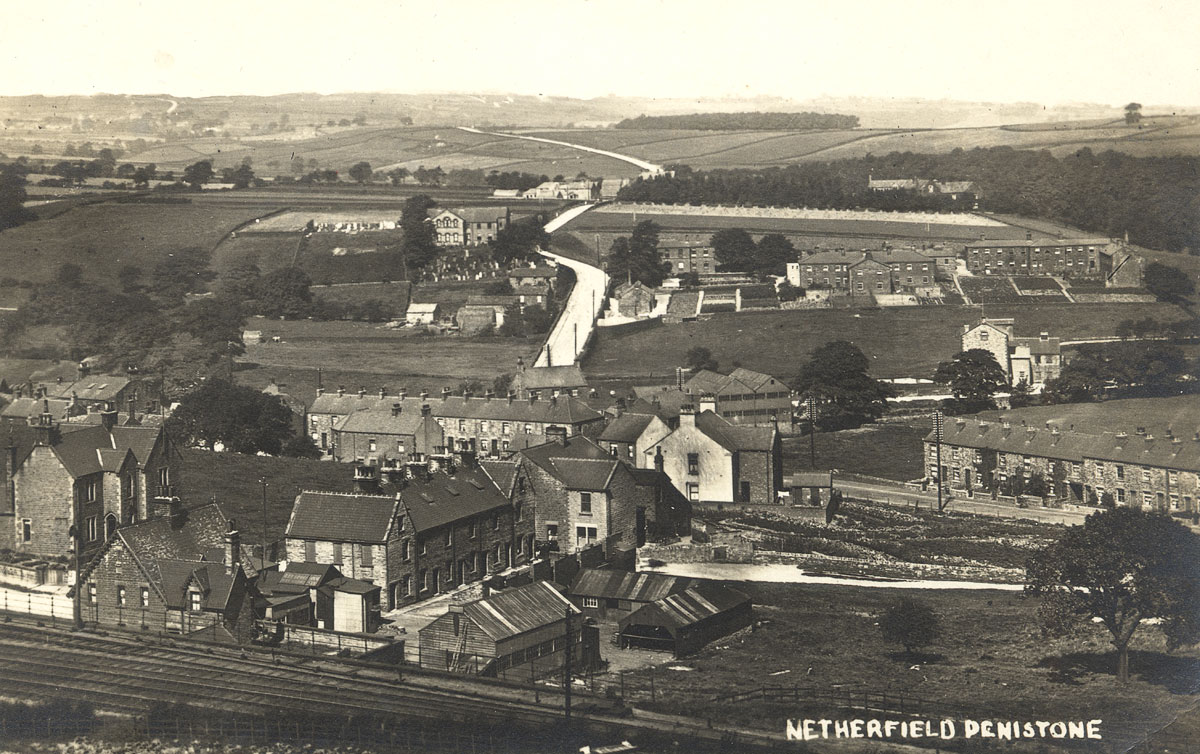 A market first established at Penistone.

A Cloth Hall and Shambles built in Penistone.

Opening of new organ erected in a gallery at the west end of Penistone church.

First Wesleyan chapel built in Penistone at a cost of £150. Later sold and converted into two houses Nos. 22 and 24, High Street.

The common lands in Penistone were enclosed.

Was a remarkable dry year. No rain fell from March 21st. to Sept. 23rd.

Viaduct near Penistone over the River Don built by Messrs Ingham & Bower. There are 29 arches, including the bridge over the road.

Penistone and Huddersfield Railway opened. There are 5 tunnels and 4 viaducts.

Penistone Church re- opened after restoration.

First Blow at the Yorkshire Steel and Iron Works Penistone.

Second Wesleyan Chapel built at a cost of £1,600. The building is lighted with gas and heated with hot air.

Eliza Wimbush sentenced to 15 months imprisonment for uttering a forged cheque at Penistone.

Market Place Penistone, widened by removing a portion of the Grammar School House. Cost of alteration £550.

John, Thomas, George, and Hannah, children of Harrison and Mary Tomlinson, of Penistone Green, at one birth. Two of the boys were still born the others died shortly after. A Donation of £2 was received from the Queen.

The footpath which formerly ran from Dobbin Gaps to Spring Vale under the Railway Bridge, and between the Steel Works and the brook, was diverted at this time having been formally inspected by two Justices of the Peace. The diverted path now passes on the south side of the railway in the road near Corunna Terrace.

A railway accident, resulting in the loss of 4 lives and injury to upwards of 40 persons, occurred at 8.29 a.m. at Barnsley Junction, near Penistone.

Depression in trade. A relief committee formed in Penistone.