( Scroll down for photos )

It was Wednesday 4th July 1838, a humid, sunny and warm summer day above the pit top. Over 300ft underground, around 50 children and 33 coal getters were cutting and moving coal, eager to make up time and money following four days unpaid holiday for Queen Victoria’s coronation celebration.

Moorend Colliery and the adjoining Huskar pit drift were owned by the Clarke family of Noblethorpe, Silkstone. Just six days earlier, the Clarkes closed their mines and hosted a celebration on their parklands for families of the miners. Little did some know that these would be the last happy times spent together, unaware of the horrors which would subsequently unfold.

Huskar pit, which had a day hole leading into Nabs Wood, was a sloping old mine seam which zigzagged to the coal face and was used for ventilation purposes. Together with Moorend, 100 children worked down the mines at Silkstone, joined by 70 colliers.

The man of the house, often the strongest, would be contracted to produce a certain amount of coal within a fortnight. He was helped by his wife and children who worked as trappers and hurriers, helping transport the coal from the rock face to the surface via carts and passageways.

Amongst the 50 children working there that day was little Joseph Burkinshaw, just seven-years-old, who had only been there three days. His dad John worked on the coal face and his older brother George, ten, was a hurrier. Joseph and his fellow trappers earned around sixpence a day, or 2.5p in today’s money. They worked by candlelight for 12 hours, opening and shutting the traps to keep the pit ventilated and let the hurriers through with the coal tubs. Conditions were dark and damp. Children were cooped up inside for extremely long periods without regular rest or food breaks. Hurriers were fastened to the coal tubs, pushing and pulling excessive weights with their arms or even heads.

A Change in the Weather

Although it started off as a glorious summer day, the weather quickly deteriorated on Wednesday 4th July and by 2pm a vicious thunderstorm ravaged the village and surrounding areas. Property and land were destroyed.  Rivers and streams overflowed.

As the miners worked away down the pit, the water began to devastate the area above. Two engine tenters became concerned at the amount of rainwater and feared it would flood the pit bottom. Steward William Lamb began to prepare for evacuation. However, the engine and boiler yard had been flooded, extinguishing the fire in the furnace which powered the winder engine to the shaft. Instead, workers would have to be lifted out manually a few at a time. Lamb instructed everyone to stay together at the bottom of the pit.

Unbeknown to them of what raged on above, the children feared a thunder clap was instead a deadly firedamp explosion. Having already spent nine hours underground and desperate to save themselves, 40 of the children ignored Lamb’s instructions and set about making their way to Huskar drift, climbing the 15 metres to reach the day hole opening. Of these children was Lamb’s own son, eight-year-old George. Two of the four Wright brothers, Isaac and Abraham, 12 and eight, also tried to escape, fearing the same fate as their father John who had been killed by a firedamp explosion the previous year. Their older brothers William and John, 25 and 17, would have worked on the coal face.

What the children didn’t know was that near the top of the entrance was a stream which had become a swollen and raging torrent.

While the children were climbing the slope, the water burst through and poured down the drift, trapping and drowning 26 of the 40 children against the ventilation door through which they had just passed.

Fourteen others managed to escape where they were met by banksman Francis Garnett. His own four children worked at Moorend, one of whom died in the flood. The two younger Wright brothers also died in the flood, as too did the Burkinshaw boys, with dad John saying it was a pure accident with nobody to blame. He died the following January aged 35, the price of a short life expectancy paid for working underground in the terrible conditions.

After the water had finally subsided, the remaining miners and the bodies of the dead children were brought to the surface where Reverend Watkins and Dr Ellis determined none could be saved.

The children, aged between seven and 17, were taken to Throstle Hall Farm before being transported by cart to their homes across Silkstone, Dodworth and Thurgoland. One or two corpses were left at almost every home.

An inquest was held at the Red Lion pub where a jury inspected the bodies; it wasn’t until after 11pm before any evidence was heard due to the sheer amount of children involved. The unanimous verdict of the inquest jury was accidental death by drowning.

Funerals were then held on Saturday 7th July, attended by thousands. The children were placed in seven graves; 11 girls were buried together in three, with the 15 boys in the other four graves.

Coffins and shrouds were provided by the Clarke family along with a memorial which was erected in the churchyard in 1841.

The side of the Monument Facing the Church bares the following inscription.

Take ye head watch and pray for ye know not when the time is. Mark X111 Chap 33 Verse.

Was erected to perpetuate the remembrance of an awful visitation of the Almighty which took place in this Parish on the 4th day of July 1838.

On that eventful day the Lord sent forth His Thunder, Lightning, Hail and Rain, carrying devastation before them, and by a sudden irruption of Water into the Coalpits of R.C.Clarke Esqr. Twenty six human beings whose names are recorded here were suddenly summon’d to appear before their Maker.

Every neglected call of God will appear against Thee at the Day of Judgment. Let this solemn Warning then sink deep into thy heart and so prepare thee that the Lord when he cometh may find thee WATCHING.

The Silkstone side of the monument bares the following inscription

Therefore be ye also ready. The Mortal remains of the females are deposited in the Graves at the feet of the Males as under named.

Elizabeth Clarkson          aged 11 years she lies at the feet of her Brother James Clarkson.

The side of the monument facing Cawthorne bares the following inscription

THE MORTAL REMAINS ARE DEPOSITED IN THE GRAVES AS UNDERNAMED

1st GRAVE beginning at the Northend

THE SIDE OF THE MONUMENT AT THE REAR BARES THE FOLLOWING

There is but a step between me and death. 1ft Samuel XX Chap 3 Verse.

The rest of the side is blank.

The Huskar disaster drastically affected the demographics of the local area with families deeply damaged by the loss of children. However, the disaster also had a strong economic effect which would shortly follow.

After news spread of the loss of 26 children, the nation began to wake up and realise the extent of women and children working down the mines in Victorian Britain. Led by Anthony Ashley-Cooper, later Lord Shaftesbury, the scandal brought about a Royal Commission of Enquiry which led to the Mines Act 1842.

This prohibited women and girls from working down the mines and also an age limit for boys of ten years. This ban meant that families with young girls and women moved to other industrial towns such as Huddersfield and Glossop in search of work in service or the woollen and linen mills.

The Victorians saw child labour as a normal part of working life. Most children started work underground when they were around eight years old, but some were as young as five. They would work the same hours as adults, sometimes longer, at jobs that paid far less.

The trapper was often the youngest member of the family working underground. Their job was simple: to open and close the wooden doors (trap doors) that allowed fresh air to flow through the mine. They would usually sit in total darkness for up to twelve hours at a time, waiting to let the coal tub through the door. It was not hard work but it was boring and could be very dangerous. If they fell asleep, the safety of the whole workings could be affected.

The Hurrier and the Thruster

Hurriers would be harnessed to the tub, and thrusters would help hurriers by pushing the tubs of coal from behind with their hands and the tops of their heads. The tubs and the coal could weigh over 600kg (app 12cwt), and would have to be moved through roadways which were often only 60-120cm high (23-47 inches).

Since the disaster, efforts have been made in the village to remember the lost children and acknowledge the tragedy which has become ingrained in Silkstone’s history.

To bring joy in light of sadness, a commemoration has been held every ten years since 1968.  The 180th anniversary was be the biggest event ever hosted, involving the wider community including the two local primary schools.

The children’s bodies were brought up from the pit and buried together in the churchyard of All Saint’s Church, Silkstone. A memorial was erected bearing the names and ages of those who died, which today is the logo of the village’s primary school. Nationwide, the disaster shocked public opinion, and the resulting inquiry led to the 1842 Mines Act which sought to introduce some protection for child miners and meant that all girls and boys under the age of ten were prohibited from working underground.

In 1988, the community of Silkstone Parish built another memorial in Nabs Wood, Silkstone Common depicting two children at work underground. In 2008, to mark the disaster’s 170th anniversary, the event and subsequent inquest were turned into a play by Sylvia le Breton and performed by the local Grass Roots theatre group in Silkstone church. In 2010, a commemorative stained glass window crafted by local residents was installed in one of its chapels.

A book by Alan Gallop about the event’s history, “Children of the Dark: Life and Death Underground in Victorian England” was published in 2003 and Peter Bond wrote and performed a song, “Act of God” about the tragedy; the song is included on the 1979 album “See Me Up, See Me Down” from Highway Records.

The Kate Rusby song Halt the Wagons from her 2019 album Philosophers, Poets & Kings references the tragedy from the point of view of a grieving mother. 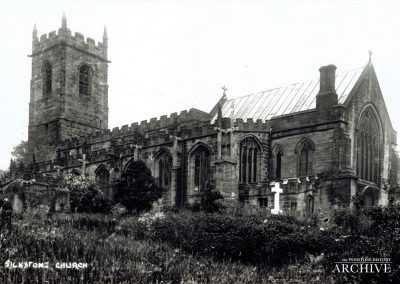 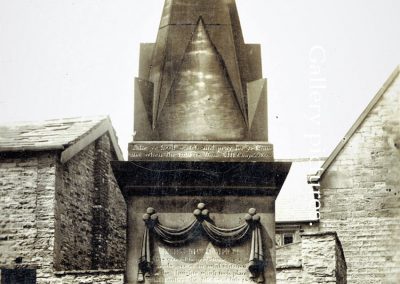 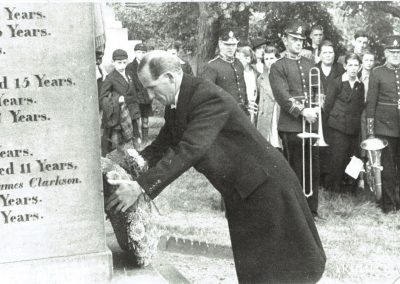 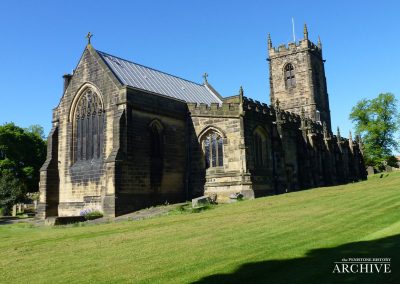 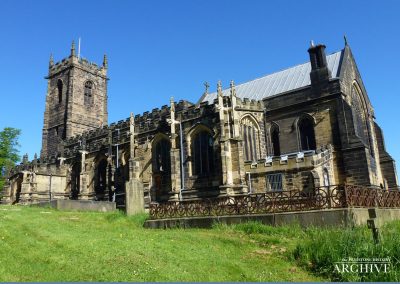 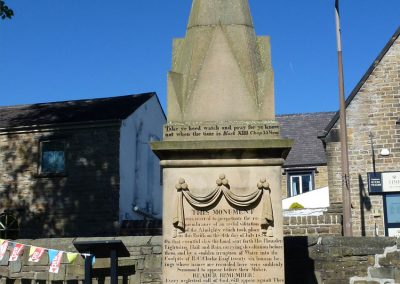 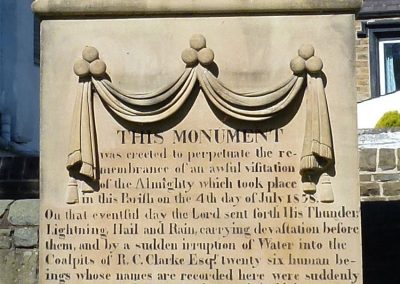 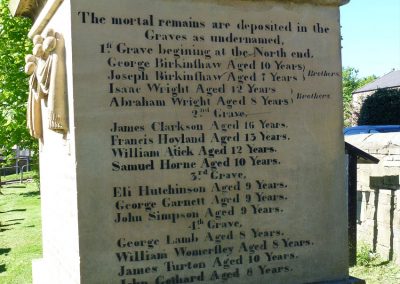 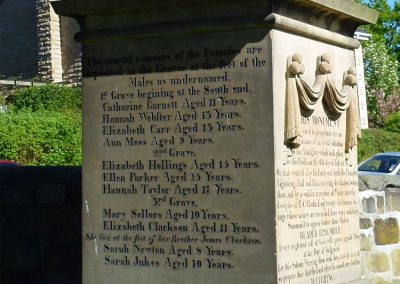 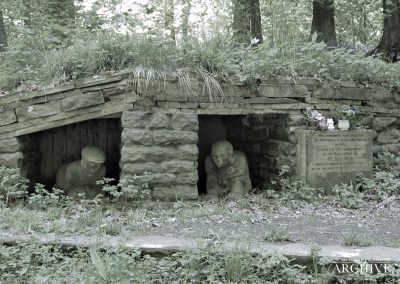 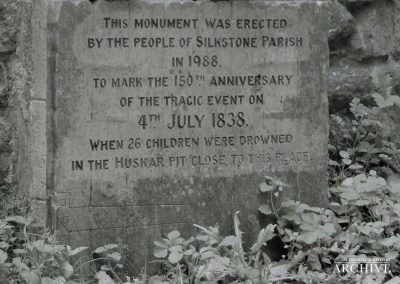 << Back to the main Silkstone page

<< Back to the main Silkstone Common page