Nicholas Saunderson was born in Thurlstone where his father, an excise man, owned a small estate; probably a very small estate since Nicholas was born in a cottage in January 1683. When he was one year old, he caught smallpox; abscesses formed in his eyes and he lost not only his sight but also his eyes. When he was old enough, he was sent to the school in Penistone (then a small schoolhouse opposite Penistone church). His schoolmaster Mr Nathan Staniforth taught him Latin, Greek and French. His father taught him arithmetic. Legend has it that he learnt to read by running his fingers over the gravestones.

At the age of eighteen, Dr. Nettleton of Halifax and Richard West of Underbank befriended him – Underbank Hall is about half-way up the steep lane out of Stocksbridge which goes towards Oxspring and Penistone. The introduction to ‘The Elements of Algebra’ describes Richard as ‘A gentleman of fortune and a lover of mathematics’. They taught him algebra and geometry by reading him the works of Euclid, Archimedes and Diophantus in Greek. Very soon, he was their master in these arts. He was sent briefly to a private Academy at Attercliffe; but he was not happy there, not approving of their philosophy, and he left. Between the ages of eighteen and twenty-five he lived at his father’s house in Thurlstone. It was decided that he should go to the University of Cambridge and since his father could not afford to send him there as a student, he was taken there by a friend (Mr Joshua Dunn a fellow-commoner of Christ College) as a teacher rather than a student; they had also made plans to set up a school in London for Nicholas if he did not succeed in Cambridge.

In 1707, he stayed at Christ College as a guest of his friend and soon the college became so impressed with his talents that he was given his own rooms. However, the college would not admit him as a member because of his lack of a degree. He was there as an honoured guest and, at first, was not allowed to teach. Eventually he so impressed Professor Whiston, the Lucasian professor of mathematics, that he was allowed to teach.

He was a brilliant teacher, often offering many alternative solutions to problems. He taught geometry with an Armillary sphere, and ‘regular solids and the form of several curves carved in wood’. He specialised in providing simpler explanations of the mathematics of Euclid, Archimedes, Diophantus and Newton for his students. He explained Newtonian philosophy to the still sceptical students and masters of mathematics of Cambridge. He fiercely defended Newtonian ideas of the ‘Algorithm or Principles of Fluxions’ (calculus), teaching that ‘the whole doctrine was defensible by the strictest rules of Geometry’. He, like Newton, attacked the ‘Vortices and other chimaeras of Des Cartes’ [Rene Descartes, 1596 – 1650].

He soon became the close friend of Sir Isaac Newton, Dr Halley and Abraham de Moivre. He corresponded with Voltaire. When Dr Whiston was removed from his professorship, Saunderson’s influential friends campaigned on his behalf. In 1711 Queen Anne (the last Stuart monarch) made him a ‘Master of Arts’ and he was appointed Lucasian professor of mathematics. He delivered his inaugural speech in faultless Latin. He was elected a fellow of the Royal Society in 1719, and lived in Christ College until 1723, when he married the Rector of Boxworth’s, William Dickons’, daughter, and lived outside college. They had two children, John and Anne. In 1728, King George II visited Cambridge and created him ‘Doctor of Law’.

He was a robust man, said to be fond of hunting on horseback; a mounted servant rode before him and his own horse followed. He is known to have revisited Thurlstone at least once in his life. Among the stories told of him is this: Coming down a lane, between Penistone and Thurlstone, with some friends, he went in front to open a gate. He went to the wrong side of the gate to open it and said, “I can tell you that forty years ago this gate used to open on this side”. Which they later found, on enquiry, to be true. His hearing was so sensitive that apparently he could tell the dimensions of a room as he entered, as if he was a bat. His sense of touch was so delicate that he could tell forged ancient Roman coins from genuine ones saying, “I can tell by the roughness of them”. ‘Saunderson had a good ear for music, and could readily distinguish to a fifth part of a note; he was a good performer with a flute.’

He became over weight and complained of numbness in his limbs. He died of ‘mortification of the foot’ in 1739 at the age of fifty-six and is buried at Boxworth. There has been speculation as to whether he was an atheist or not: – a serious charge in those days. A historian of Boxworth, Christopher Parish, writes ‘His portrait showing him holding an astrolabe is to be seen on the stairway to the Council Chamber in the Old Schools at the University. He was often seen riding on horseback. Cole states that “he was reckoned to have no great sense of religion”. Dr Plumptre then Regius Professor Physics at Cambridge attended Saunderson’s funeral and noted that “when the coffin was put in the earth, it almost swam by reason of the springs and the grave half full of water.”…’  Edmund Halley said of Saunderson ‘Whiston was dismissed for having too much religion, and Saunderson preferred for having none.

Of his burial place, Parish says ‘Professor Saunderson’s memorial stone lies on the ground to the south of the present altar [of Boxworth Church]. The late Churchwarden, Fred Kester, informed me that Saunderson’s coffin was uncovered to the south of and outside the chancel some years ago when a later grave was being dug.

Gamaliel Milner, of the today’s senior Canadian branch of the family, visited Boxworth recently and said that the memorial stone is now illegible

Edited – the full version is available for inspection in the Archive Room. 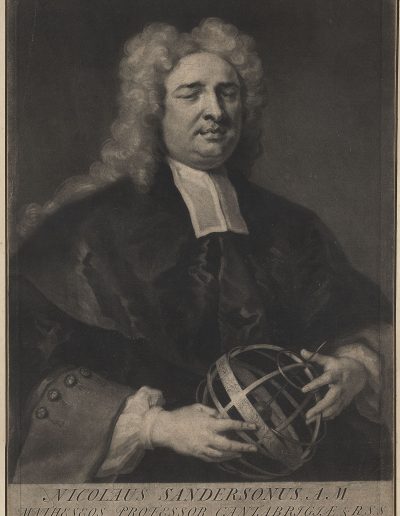